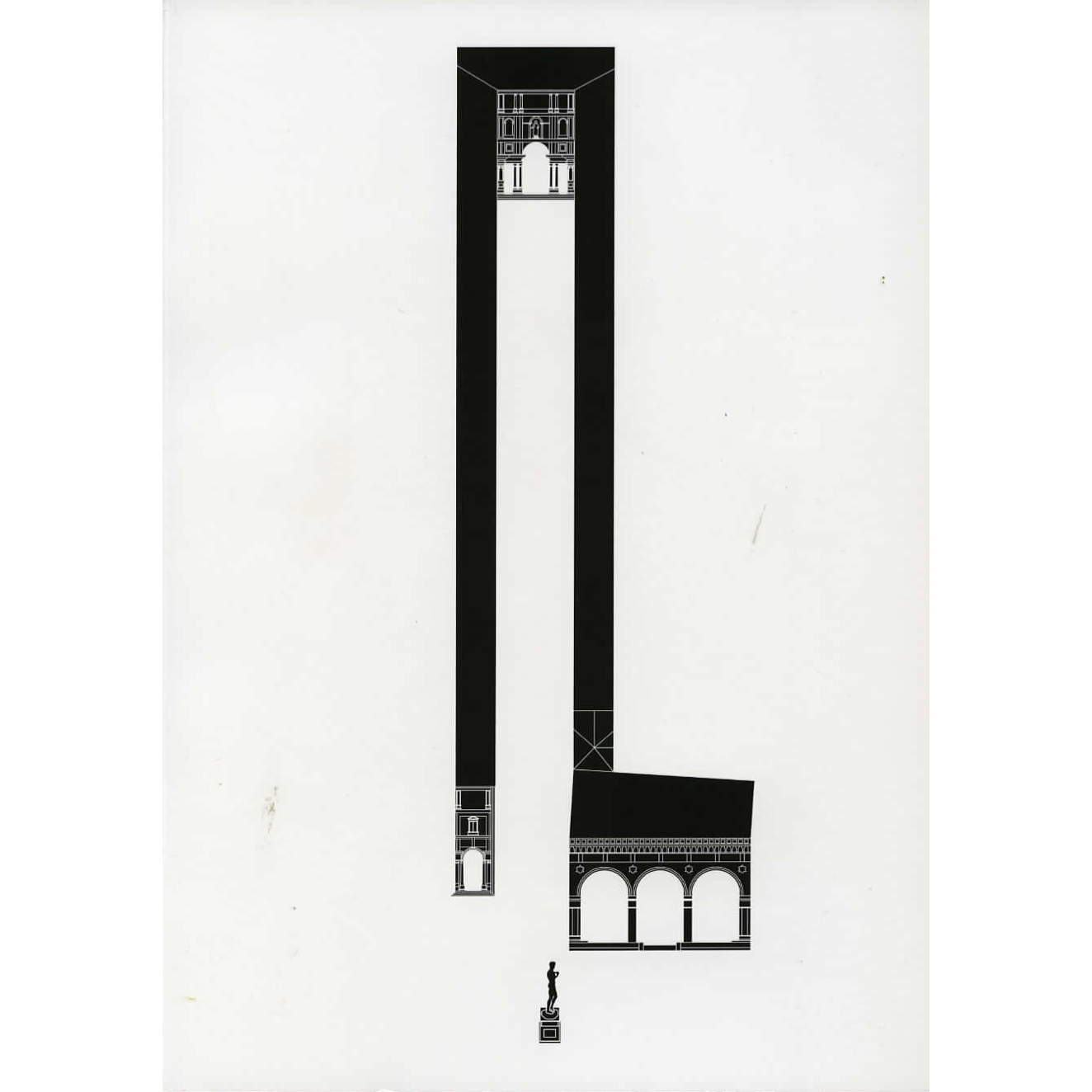 Essay for SAN ROCCO (Italy) on the role of concepts in architecture. it was published in issue 04 „Fuck Concepts! Context!“. For the whole issue see here (but only after reading my text of course^^):http://www.sanrocco.info/04_fuck.html

It must also be said that it is not the role of language and linguistic concepts in general that we must critically review, but of one particular kind of language, namely formal languages. The development of architecture and urban phenomena in the 19th and 20th centuries was profoundly influenced by that of modern logic and then by the subsequent emergence of the digital habitat. In the course of this, it has gotten subsumed all too often under the rules of formal linguistic systems that are, among other things, prone to capitalistic bureaucracy/rationalization. But this diagnosis, of course, does not imply that ideas cannot or should not play any role in architecture; as epistemic concepts they are an indispensable component in the creation and use of architecture. In fact, these epistemic concepts, these ideas, are precisely what enable us to make, perceive, debate and use architecture. Our task here is to differentiate the epistemic role of concepts in architecture from the “linguistification” of architecture by way of externally imposed formal concepts.

In order to get a clearer grasp of the difference between epistemic and formal concepts, three philosophical considerations are of particular relevance: the difference between natural and artificial languages, the epistemic difference between the context of justification and the context of discovery in the theory of science, and the notion that the impossibility of translation between architecture and linguistic concepts is but a special case of the general indeterminacy of translation. Without going into too much technical detail here, I would like to introduce these considerations informally in order to argue that ideas are not identical with formal concepts and that they are, when understood as epistemic concepts, as indispensable in architecture as they are everywhere else. Even though architecture indeed cannot be translated into formal language, it can and must be translated in some way, as the translation into and through different media is the precondition to its collective creation and use. Thus, instead of banning ideas from architecture, we should focus on understanding how the translation between architecture and formal concepts works and if and how it is subject to restrictions.

The translation of architecture in everyday language-concepts does not lead per se to a violent reduction and distortion of architecture: rigidly defined concepts exist only in formal languages, whereas concepts in natural languages always remain fundamentally ambiguous. Thus the everyday talk in natural language about architecture can, like architecture itself, never come to an end; both natural language and architecture are constantly pragmatic approaches towards reality. In contrast, the analytical-descriptive use of concepts within the framework of formal languages can be – and indeed has been – a threat to architecture, as can be seen, for example, in contemporary attempts such as the dogmatic “style of Parametricism” by Patrik Schumacher, which he sets out to define by way of describing the “formal and functional taboos and dogmas”[1. See Patrik Schumacher, The Autopoiesis of Architecture: A New Framework for Architecture (Chichester: Wiley, 2011), 286. Schumacher bases his approach on Imre Lakatos’s contributions to the theory of science; see Lakatos, The Methodology of Scientific Research Programmes (Cambridge: Cambridge University Press, 1978)] that safeguard the “hard core of principles”[2. Schumacher, The Autopoiesis of Architecture, 284] of a given architectural style.

A paradigmatic figure in the formal-language approach was the mathematician David Hilbert. As a proponent of formalism in the foundational crisis of mathematics, he opted to “clean” the symbols used in mathematics by removing all concrete meaning from them and to consider the symbols themselves as the “material” of mathematics. With this approach, he followed in the tradition of Leibniz’s notion of the characteristica universalis and his “calculemus approach” to a scientia generalis.For Hilbert, mathematics consisted of the manipulation of symbols without asking what these meant or what they referred to: “the objects of number theory are [ . . . ] the signs themselves, whose shape can be generally and certainly recognized by us”[3. David Hilbert, “The New Grounding of Mathematics: First Report”, in From Brouwer to Hilbert: The Debate on the Foundations of Mathematics in the 1920s, ed. Paolo Mancosu (Oxford and New York: Oxford University Press, 1922), 202]. Thus for him, the justification or proof of a mathematical statement consisted in the demonstration that it could be constructed from a set of defined signs by way of defined rules whereas its negation could not. To achieve this, he aimed at a complete axiomatic formalization of mathematics, so that the truth of any mathematical statement could be decided by way of an automatic or algorithmic procedure. This is, in a nutshell, the central idea behind his famous so-called Hilbert Program, which he presented at a conference in Paris in 1900.

For the calculemus approach and its idea of finding a universal “formale Redeweise”, it is characteristic to privilege the context of justification over that of discovery. What matters most in this perspective is not the question of whether or how new insights are discovered, but rather which proposition – i.e., which syntactical ordering of concepts – can be proofed to be true in a formal language by way of automatic procedures. The Logical Positivism of the Vienna Circle particularly tried to build a unified scientific system based on this approach. Such prominent figures as Karl Popper, Hans Reichenbach and Rudolf Carnap aimed at what the latter called the “rational reconstruction”[4. See Rudolf Carnap, The Logical Structure of the World and Pseudoproblems in Philosophy, trans. Rolf A. George (Chicago: Open Court Publishing, 2003), 158ff] of scientific propositions in his Der logische Aufbau der Welt. For Logical Positivism, a proposition is scientific only when it can be logically reconstructed and justified by way of formalized, calculation-based procedures.

The crux of this approach is that it excludes everything that is not expressible in formal language per definitionem. Accordingly, all processes of discovery and design are excluded from the realm of science. Although this is already problematic in science, in architecture it is obvious that this picture is crooked because it is missing one – if not the most – important aspect: if science is only concerned with the justification of propositions, where do these to-be-justified propositions come from? In architecture, the “logic of discovery” is clearly an indispensable, integral aspect of designing as well as of using and debating a design. This explorative and creative aspect of architecture is indeed neglected if it is reduced to a formale Redeweise that systematically suppresses the relation between concepts and reality.

But formal concepts are not the same as ideas. Formal languages are one particular mean by which to describe and deal with reality. They do not objectively describe an independent ontology; instead, they construct ontologies by way of establishing formal procedures of description. But does this strategy also work for design? Of course, aspects of the design process can and must be objectified by way of formal procedures. But every formalization is itself, in fact, a translation: from a potentially infinite sea of possibilities, some are selected and related within a formal language. There is good reason to do this, but architecture – like science itself, of course – always has to be aware of the consequences of this translation.

But that’s enough of formal languages and the context of justification for now. Instead, let’s have a look at natural languages and the aspect of discovery. With his thought experiment on “radical translation”,[5. See Willard Van Orman Quine, Word and Object (Cambridge, Mass.: MIT Press, 1960), 26ff., chap. 2 “Translation and Meaning”] Willard V. O. Quine has shown that it is logically impossible to decide whether a translation between different natural languages is absolutely correct, as there is no objective linguistic framework available within which this question can be settled. His famous thought experiment is set up in a fictional jungle where a field linguist is trying to write a manual of translation for a language of an as yet unknown tribe. The linguist observes that the tribe members frequently make the utterance “gavagai” if a rabbit is present on the scene. The problem with this situation for the linguist is that it is impossible to determine what the tribe members are referring to and mean by “gavagai”. Is it the tangible rabbit as a singular individual? Or is it the momentary state of a rabbit, or “rabbithood” in general? Or does it actually mean “Look! Food!”? In order to specify what “gavagai” means and refers to, the linguist needs to be able to talk with the tribe members, and yet this means that he already needs to know the language he has only begun to investigate. Quine’s point is that different manuals of translation for the same language are always logically possible, thus it’s not possible to decide which manual is theright one. The only means we have is to collectively use the manuals and see which one works best from a pragmatic point of view, which means which one helps most to discover the lebenswelt of the tribe and facilitates the most fluent communication possible. But this indeterminacy of translation not only holds for the exploration of exotic languages in fictional jungles. It also begins “at home”,[6. Willard Van Orman Quine, “Ontological Relativity”, Journal of Philosophy 65 (1968): 200] as Quine says, in one’s own mother tongue, for there is no formal way to be certain about the meaning of a word somebody else is using; we always have to translate the other person’s use of words according to our own understanding of them.

Architectural design and the use and interpretation of architecture is in a similarly radical situation, in the sense that there is no formal way of designing and using architecture in theright way. In this respect, to design is to translate, or translation is the principal operation of every design practice. Only by collectively translating the to-be-designed between different media can one develop the skill to design it. From this perspective, letting architecture speak for itself or show itself in its presence – as Rossi has expressed in his claim that in an old people’s home the “sorrow is in the walls, in the courtyards, in the dormitory”[7. Aldo Rossi, L’architettura della città (Milan: Città Studi, 1995), 130] – might be a meaningful description, but taken as a quasi-formal equation, it doesn’t help to understand how the sorrow “got there”. From an architectural perspective, the important point is that we need to translate architecture collectively via different media and perspectives, because only the misunderstandings and the mistakes that occur in the process of translation can make us aware of differences in the understanding of architecture and urge us to make refine our designs or alter and adapt our uses of architecture.